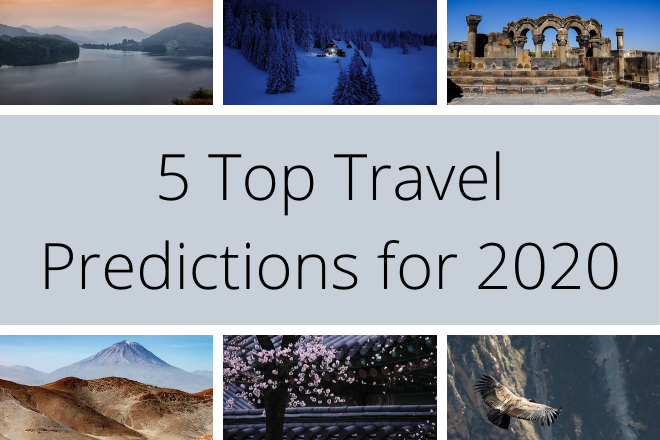 In an unsettled world, where climate change and political trouble dominates the headlines, where do you think the top travel destinations of 2020 are likely to be? The Booking.com team believe they have the answers. Their recent survey revealed that up to 70% of people looking to take a holiday internationally are keen to explore somewhere completely new, off the beaten track, and do something theyve never done before.

They compiled a list of 5 destinations that they predict will be popular in the new year. Today were going to look at those destination choices in detail, with a view to helping you get there with Saga Holidays.

South Korea has long been in the Western consciousness, given that its music and foodie scene has made such an impact in the UK. If you havent been offered the national Korean dish, Kimchi is a British restaurant recently, youve clearly not been dining in the hippest places!

Segowipo is a lively coastal city on Jeju Island. It has a very rich history, as its recognised as an ancient kingdom that once traded with the rest of Korea and China. Citrus farms thrive here, in the subtropical climate, lending the air a tangy, aromatic fragrance. The city sits on volcanic rock, with an old-fashioned Eastern sea-side vibe and is surrounded by clear blue waters, which are popular with scuba divers. Its idyllic and unusual.

Its the Cheonjiyeon Falls that Booking.com targeted as the attraction everyone should visit during a trip to Segowipo. Legend has it that 7 fairies bathed in the waters of this waterfall, earning it the nickname Gods Pond. This natural three-tiered waterfall is 72 feet at its highest point and the surrounding area is home to impressive wildlife. It can be reached via the hiking trails that lead from the Yeomiji Botanical Gardens, through the forest.

If youre interested in an escorted tour to South Korea, we offer a number of luxury all-inclusive packages there. These include Intrepids real food adventure, which will take you on a gourmet tasting tour of Seoul, Jeonju and Busan, South Korea Discovery by Cox and Kings, which includes a journey deep into the mountains and valleys of the Seorak National Park and Wendy Wus Scenic South Korea, with its emphasis on showing off some of the countrys oldest and most beautiful temples.

Poland is practically on our doorstep and prized particularly by UK residents for its Christmas markets, but how many of us have ventured outside its biggest cities; Krakow and Warsaw?

Swinoujscie is a modern port town in north-west Poland, that sits next to the Baltic Sea. Its home to the largest, longest beach in Poland and from here you can widen your journey by taking a ferry to Sweden or Denmark. Popular attractions here include its 19th-century Mediterranean gardens, Museum of Sea Fishery and their historic lighthouse, which is also 19th century. Its this latter feature of the town that was named by Booking.com as the must-visit site.

Built-in 1858, this lighthouse is one of the tallest in the Baltic Sea and has an observation deck with an incredible view. Bear in mind that youll have to climb 300 winding steps to get the deck!

Our favourite package to northern Poland is Sagas Passage through Pomerania: Berlin-Tegal to Stralsund. This luxury cruise along the Oder will take you to quaint seaside towns and the nature reserves of both Germany and Poland. It includes a tour of Szczecin and Swinoujscie.

Montenegro is perhaps one the most mysterious of the Balkans. Its a land of beautiful mountain ranges and tranquil lakes, which takes its cultural influences from the East and the West. Much of it is unchartered territory to tourists, due to only opening up politically in recent years. This is probably why its featuring in a lot of top 2020 destination lists!

Zabljak is a town in northern Montenegro, known as the gateway to the Durmitor National Park and Black Lake. Its also very high up, given its mountain location. It stands at 1450m above sea level. For part of of the year, the highest peaks here are covered in snow.

Travelling to Montenegro with Low Cost Deals couldnt be easier. Essential Montenegro and Highlights of Montenegro Group Tour will take you to Dubrovnik, the Durmitor National Park and Biogradska National Park before moving on to Budva and the truly beautiful Bay of Kotor. Youll sample local cuisine, view local wildlife as you hike through the mountains, and discover a variety of breathtaking religious and historical architecture.

Armenia sits in the middle of Georgia and Azerbaijan, with Turkey just next door as well. It is a country that lies just south of the Caucasus Mountains. Historically Armenia was ruled by the Ottoman Empire and by Russia, before it became independent in 1990. It is full of picturesque mountain villages, with the tallest of the range, Mount Ararat, acting as a backdrop for some of the more famous high altitude monasteries.

Yerevan is the capital of Armenia and one of the oldest, continuously inhabited cities. It boasts historic squares, glorious parks and historic monuments. The Cascade Stairway and Museum is just one of the examples of what makes this an art-focused, architecturally ambitious city. It is a giant, limestone stairway which houses fountains, gardens and sculptures. There will be plenty to look at as you make your way down it!

Looking to travel to Yerevan with Low Cost Deals? You can get to know the country via the Highlights of Armenia Group Tour we offer Essential Armenia or a number of other all-inclusive packages that will take you to destinations in both Armenia and neighbouring Georgia.

The Andes is one of the worlds longest mountain ranges and Salta is an Argentinian city within it. Its architectural style is a combination of colourful Spanish colonial and heritage Andean.

While youre here, youll need to allow time for a visit to the 17th century San Francisco Church, The Hill of Seven Colours and the Salinas Grandes; a large salt flat, that looks both mysterious and intriguing!

When youre ready to find out more about Argentinas mountain cities and the surrounding areas, we can tell you everything you need to know about travelling in South America. Among our most popular Andes packages are the Cycle Chile and Argentine tour, which will take you from the Atacama Desert to Salta on bike. This tour is provided by Exodus and perfect for those of you with an adventurous spirit, as well as keen cyclists. Apart from that, you might prefer a wider tour, which will encompass highlights of northern Argentina and provide you with your own personal tour manager to get you about.

If youd like to find out more about any of the locations highlighted by Booking.com as their destinations to watch in 2020, then don’t hesitate to contact one of the Low Cost Deals team and we’ll work to find your perfect holiday within your budget.

The Foreign & Commonwealth Office have up-to-date advice on staying safe and healthy abroadhttps://travelaware.campaign.gov.uk/