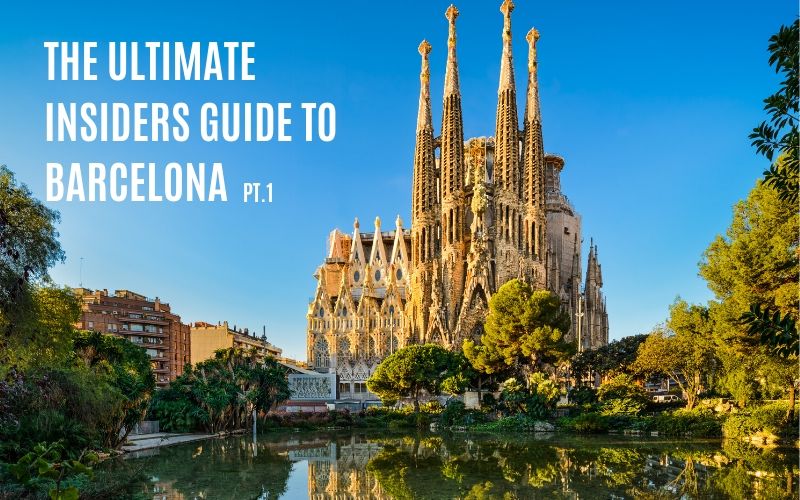 Visit the Catalonian giant with our Barcelona Travel Guide…

Barcelona has grown a huge amount within the last 150 years, turning it from a small, industrial centre and fishermans haven, into the ultra cosmopolitan metropolis it is today. If you havent visited the city yet, it should at least be on your Wish List.

There are 100’s of operators that specialise in luxury all-inclusive escorted tour packages in and around the Spanish cities and many of these tours give you several days to spend in Barcelona at your leisure. This is because its such a hugely popular destination. It has attractions that cater for every age group, beautiful architecture, fantastic cuisine, and plenty of sunshine. Whats not to like!

With so much to see and do here, the question we get asked most frequently is how can you best spend 2-3 days in this wonderful city? This Barcelona travel guide is our response to that. We wanted to give you the tools you need to put together a 24-hour Catalonian schedule. Its worth noting that the city has so much to offer, weve had to split the blog into two parts! Heres our list of all the places you need to know about: 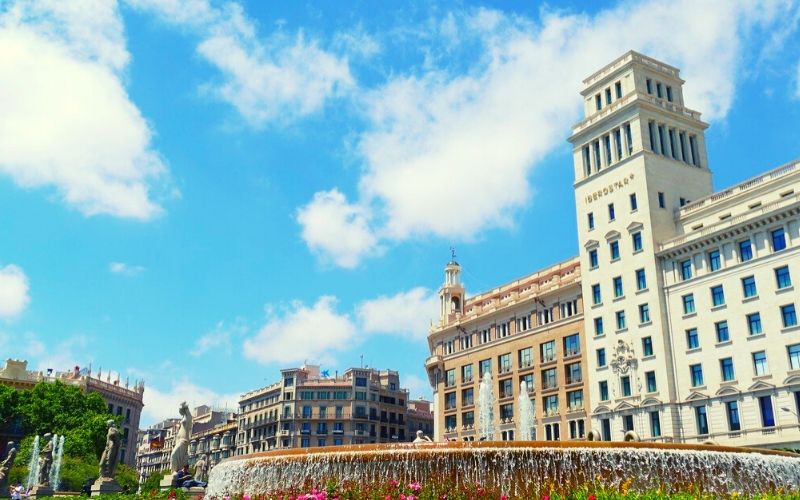 Worried about getting lost in a metropolis as vast as Barcelona? Then its worth knowing you can ask any local for directions to Plaa de Catalunya and theyll be able to help you. From this centrally located, well-loved square, where the old town meets the relatively new and upmarket neighbourhood of Eixample, youll be able to easily find your way and get to where youre going. Whether youre on foot, or travelling by bus, by metro, or by taxi, youll find all of transport life is here.

If youre on foot, you might want to visit one of the many flagship stores for the chains that surround the square, or make your way down the infamous thoroughfare that is La Rambla. Thats if you can get through the pigeons. All of pigeon life finds its way to Plaa de Catalunya too it seems! Thousands of pigeons flock around the fountains, looking for crumbs, and are chased by any little kid who turns up. 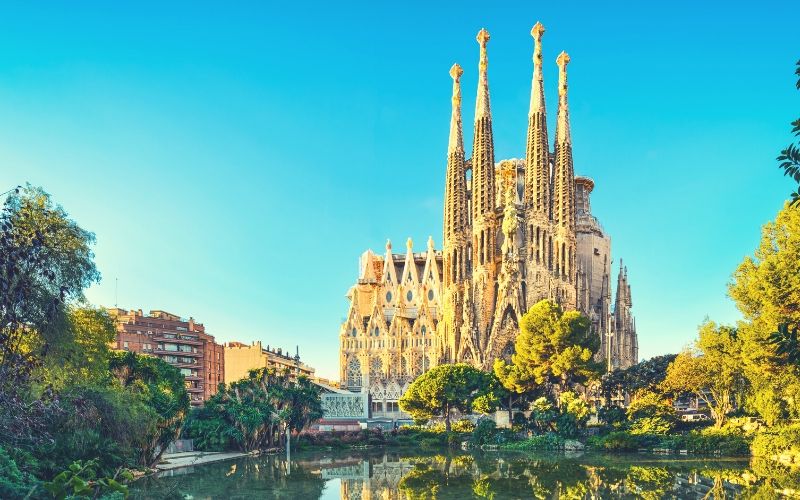 This unfinished cathedral is, without doubt, the most famous landmark of Barcelona, and an enduringly iconic image within Spain. It is the result of the lifes work of Barcelonas most famous modernist son, Antoni Gaud, whose designs can be seen all over the city.

You probably know this is the Catalonian attraction with the biggest wow factor, even without looking at its image adorning tea towels, ashtrays, and the like in the tourist shops. So, your biggest concern may well be how you can spend as much time as you want here, soaking up its ethereal beauty, but without getting frustrated at the jostling crowds.

We are here to help. Theres always a lot of people filling the pavements outside the perimeter fence of the Sagrada Familia, taking photos and attempting to buy tickets. Its a good idea to arrive early, as the cathedral opens, or to visit the attraction off-peak. If your entrance tickets arent included in your package, its certainly a good idea to book in advance online to save yourself money and hassle.

Once inside the fence, there is so much to see! The exterior walls are covered in hundreds of sculptures, ranging in size from tiny to huge. Theres so much detail, you really need to look hard in order not to miss anything.

Then, youll walk through the rose hedge decorated doorways into an auditorium with stained-glass windows decorated in the Modernist style. The light that streams in through these windows is a rainbow of beautiful bright colours.

Central columns, which resemble the tall palm trees that can be seen lining the streets all over the city, support a high stone ceiling, ornately cut in an almost cubist fashion. Its like nothing you have ever seen before, and thats before you even start climbing the steps leading up the tall, narrow spires that will take you high above the streets below and give you a magnificent view.

Even if youve been here before, its worth visiting again. Building work on the structure continues daily in its ambitious bid to be completed by 2022. 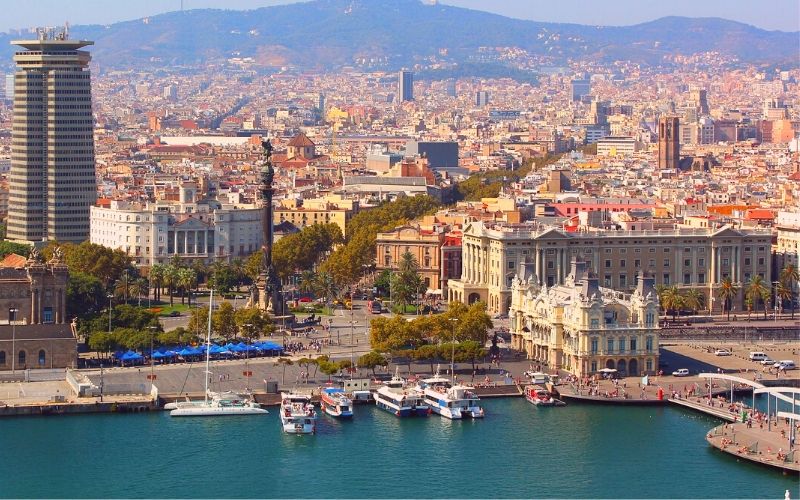 Wondering where the best place might be for chilling out with a coffee or cocktail for half an hour of people-watching? Its, without doubt, the infamous shopping street, La Rambla; a main attraction of the city and the very heart of the urban area. La Rambla runs from Plaa de Catalunya, right down to the harbour area.

Not only is it lined with all manner of shops, bars and restaurants, but youll also pass kiosks selling touristy wares, flowers and seeds, as well as plenty of pavement cafes. Towards the harbour end of the street, youll find the street entertainers and caricaturists. This end of the street draws the big crowds year-round for its exciting atmosphere.

On La Rambla itself, youll find the entrance for a number of theatres, markets and museums, including the erotica museum and the waxwork museum. MACBA; Barcelonas huge modern art gallery, and the old part of the city, known as Ravel, are just off to the side of La Rambla. This central area leading off the main Rambla is a haven of historic buildings, narrow winding streets, reminiscent of Venice, and wide, cobbled squares, filled with cafes, where parakeets fly overhead. 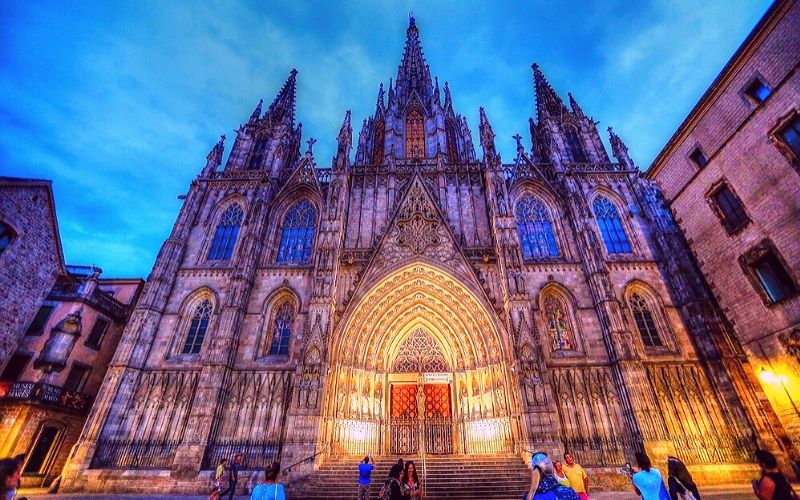 Just because the Sagrada Familia is Barcelonas most famous cathedral attraction, it doesnt mean you wont be able to marvel at some elaborate and authentic 14th-centuryreligious gothic architecture. The gothic cathedral is situated close to the marina. Its Roman Catholic, of course, and named after its patron saint; the Cathedral of the Holy Cross and Saint Eulalia. However, its known locally to its worshippers as La Seu; a word which in Catalan means seat. Its so-called as its the seat of the diocese of Barcelona.

This cathedral, consecrated in 1339, is a precious taste of historic Barcelona, but dont just take our word for how special it is. The beauty of its interior and exterior has been officially recognised, winning it the honour of becoming a minor basilica. There are fewer than 2 thousand basilicas in the world, so you get an idea of how impressive this is.

Its also home to a few peculiar objects and creatures. In no particular order, they are 13 white geese, who represent Saint Eulalia, the dancing eggs that make an appearance on top of fountains during Corpus Cristi, and a slanted crucifix which is said to have prevented a cannonball from damaging the royal ship it previously adorned! Well worth a visit, if only to see these items! 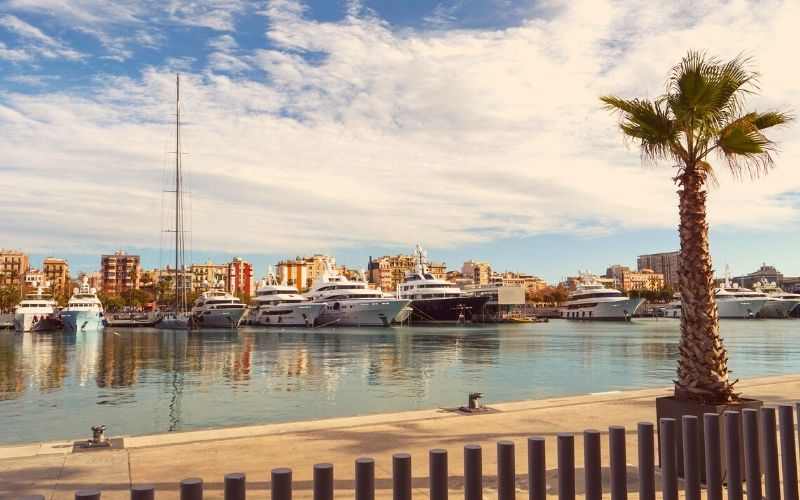 Interested in European maritime history, or simply curious about how the super-rich spend their money and time? Barcelona is home to an extensive marina which houses a range of yachts; from small competitive racing dinghies, right up to floating gin palaces and beyond. Theres also plenty of space for many of the worlds largest cruise liners to dock, releasing thousands of passengers daily into the city.

The port here is by no means a new addition to the citys shoreline. It dates back to the Romans and was an important strategic trade location, as it straddles what was the border between the Muslim South of Spain and the Christian North. Today you can walk along the purpose-built Rambla Del Mar to admire the decadent boats. Try to make friends with their owners if you can. You might get invited to the most extravagant party of your life!

As well as admiring the boats, the Maremagnum shopping centre on the quay at Port Vell is worth a visit. Chain stores sit alongside local eateries, bars and discos, giving the place a lively atmosphere day and night. Dont worry about the kids getting bored either, as an outside trampolining and play area will keep them busy for hours.

If you want to immerse the kids in culture before you tire them out, you might want to consider visiting the Museu de Historia de Catalunya beforehand. Its also in the Port Vell area and offers a permanent and fascinating showcase of life in Catalonia, both historically and now. Youre probably aware of Catalonias fight for independence from Spain, but this exhibition will give you the background on it. Catalonia has its own culture and language, which sets it apart from our Spanish regions struggling for devolution, and this makes the museum exhibits all the more compelling. 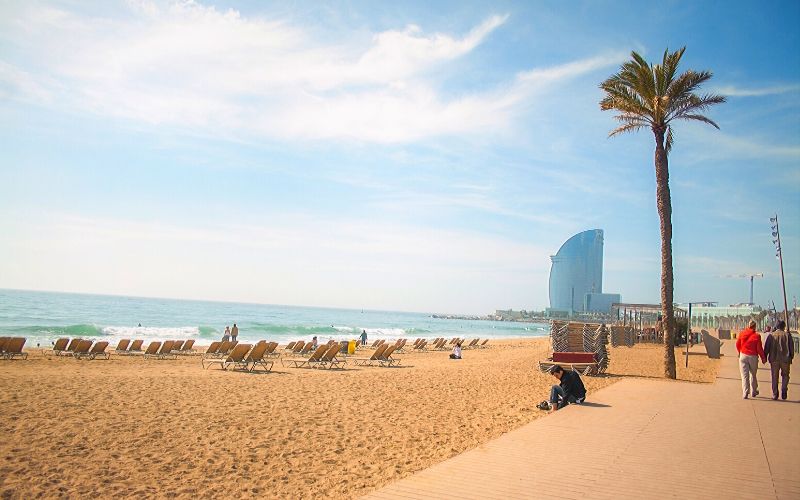 Does your partner want to take a cultural short city break, while youd much prefer a full-on Spanish sunshine holiday? Barcelona offers the best of both worlds. Barceloneta is the main city beach and just one of the many sandy havens dotted around this coastline. And, if its not beachy enough, you could always travel an hour up the road to Salou; an all-singing, all-dancing beach resort destination, that you could easily explore during a day trip.

However, even with the spires of the city skyline behind you, when you relax on the Barceloneta beach, you could be a million miles away from the world of Spains office life and built-up areas. The sand is soft, the sea is safe for swimming and youll join plenty of others looking to lie back on their loungers to catch some rays. Fruit and ice-cream sellers wander up and down providing refreshments, but theres also a wide choice of bars and restaurants lining the boardwalk that overlooks the beach.

This area of Barcelona hasnt always been this idyllic. In fact, it was ignored for many years, believed as it was, to be the sole preserve of the impoverished local fishermen who plied their trade here. But with the city being chosen to host the Olympic Games in 1992, this shorefront area received a cash injection. A massive regeneration occurred shortly afterwards as a consequence, making it one of the best-loved areas for downtime along the coast

We do the work to find your perfect holiday at the best price available. Get in touch

Or simply fill out the form below and one of our team will get straight back to you.